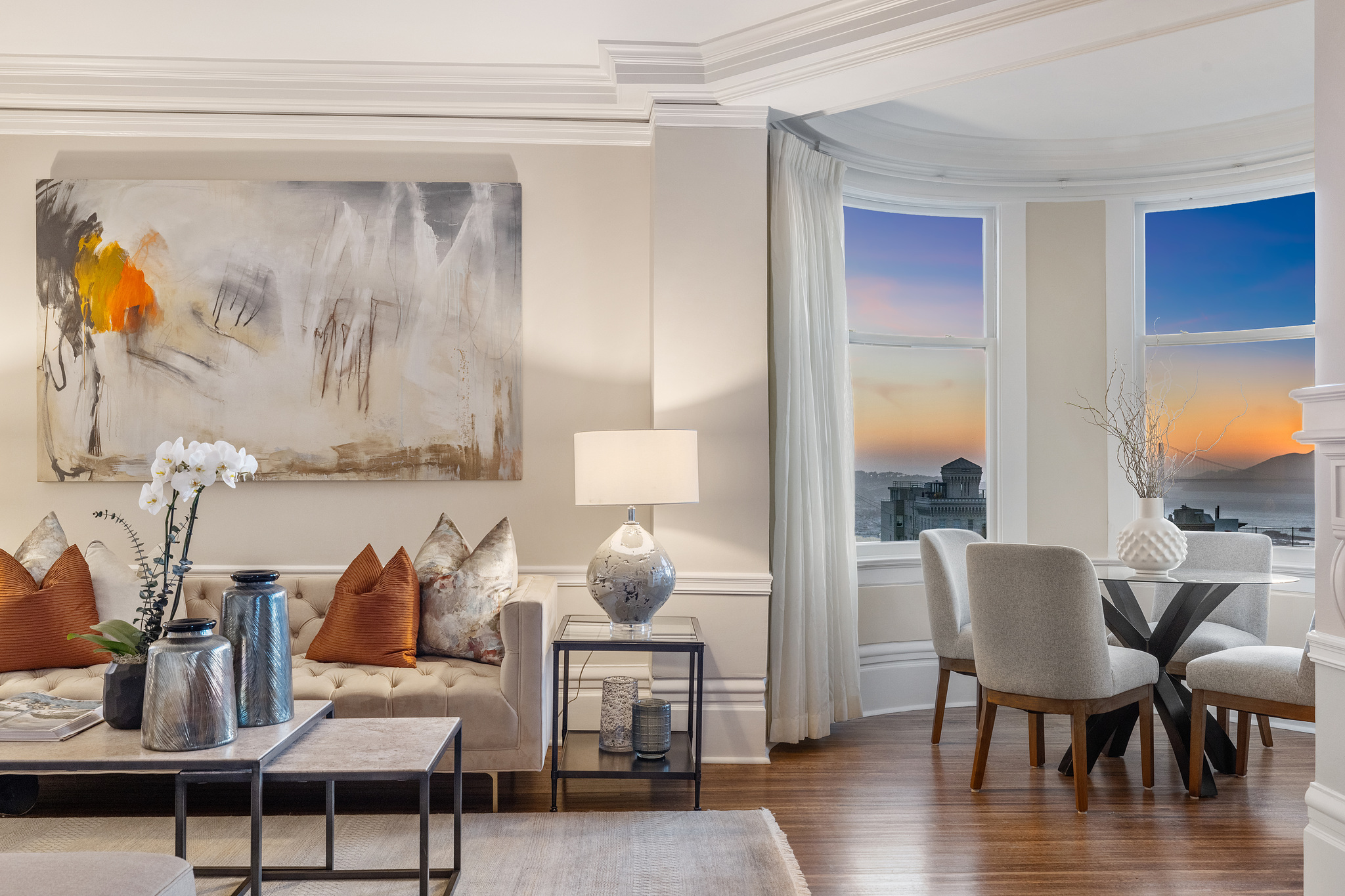 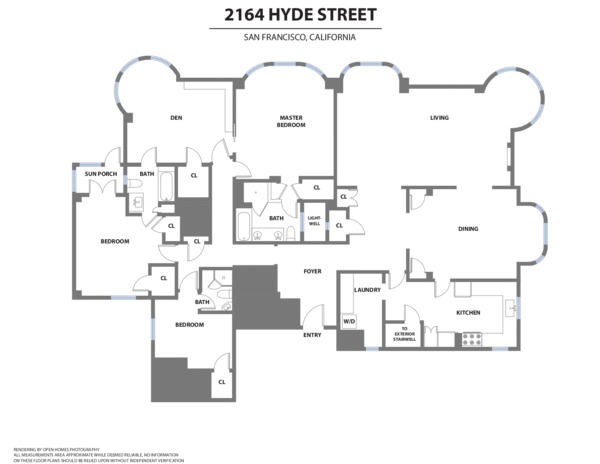 EXQUISITELY REMODELED FOR THE 21st CENTURY….

Large picture windows punctuated with charming, rounded Bay windows create a wonderfully bright and airy environment and frame postcard views of the Golden Gate Bridge, Bay and City with the charming greenery of Alice Marble Park as a lush foreground.

Enjoy a sophisticated urban lifestyle in one of the City’s most vibrant and historical residential neighborhoods close to the world-class hotels of Nob Hill, the shopping, dining and entertainment mecca of Downtown and the booming tech and business centers of Jackson Square, The Financial District and SoMa- quintessential San Francisco!

- The elevator to this floor of 2164 Hyde Street steps out into an intimate circular landing with only two residences
- A spacious double foyer opening up to the living and dining spaces creates an elegant entrance into the residence and wonderfully flowing circular floor-plan for the entertaining areas
- The beautifully proportioned living room features crown and picture moldings, a wood-burning fireplace and stunning views of the Bay and Golden Gate Bridge framed by two gracefully rounded Bay windows
- The elegant formal dining room has gorgeous moldings, wainscoting and built-ins, and a large, rounded Bay window showcasing views from the Golden Gate to Bay Bridge and beyond to the Marin Headlands and East Bay Hills
- The large gourmet chefs kitchen enjoys views of the Bay and Alice Marble Park, chic white Carrara marble counters, four-burner stainless Thermador gas cook-top with hood, built-in oven microwave and warming drawer, Bosch dishwasher and Subzero refrigerator, as well as abundant shelf and cabinet space - Off the kitchen is a laundry room with marble counters, stacked washer and dryer, and abundant cabinet space, as well as a separate freight elevator
- The wonderful primary suite enjoys Golden Gate, Bay and Park views, elegantly remodeled marble and tile bath with double sinks and separate shower/ tub, as well as a sitting room/den/dressing room that could also be a 4th bedroom
- A 2nd Bedroom has en-suite bath with shower/tub with glass door and a charming sun-room
- The 3rd bedroom also has en-suite marble and tile bath, and a glass surround shower

RUSSIAN HILL- Breathtaking views, palatial homes, grand high-rises and home to the Crookedest Street in the World: the Russian Hill neighborhood is as unique as it is beautiful…

There’s hardly a neighborhood that compares with San Francisco’s Russian Hill, with the heart-stopping hairpin turns of its world- renowned “Crooked Street”, the sheer historical grandeur of its architecture and mesmerizing views of the Bay, Bridge, and City Skyline, as well as the Capri-like slopes of Telegraph Hill crowned by Coit Tower. Enjoy some of the city’s most beautiful parks including Alice Marble tennis courts and Francisco partk all within a short distance of eachother.

Residents enjoy the hillside garden climbs, exquisite parks, and its European flair. With the many boutiques and restaurants found along the lushly green streets of Jackson, Union, Hyde. Green and Polk Streets offering exceptional international cuisine from French to Italian to Vietnamese, you can’t go wrong in this vibrant stretch of city. And if shopping is on your list, don’t miss the many delightful boutiques dotting Polk Street between Union and Broadway. And don’t forget Russian Hill’s newest major attraction “Francisco Park”- located on the North slope of Russian Hill, the park will be a verdant oasis in the heart of the City, and enjoys views spanning from the Bay Bridge to the Golden Gate Bridge and everything in between!

From quaint turn-of-the-century cottages, to lush multi-million-dollar estates, grand 1920’s pre-war co-op buildings and Mid-Century high-rises with stunning views of San Francisco’s most iconic landmarks– Russian Hill has an extraordinary array of architectural styles. Located in the heart of the City, the popular neighborhoods of North Beach’s “Little Italy”, the grand hotels and restaurants of neighboring Parisian-like Nob Hill, the art galleries and shopping of historic Jackson Square, the cultural heart of the City at Civic Center, the shopping mecca of Union Square and the booming business and tech capitals of the Financial District and SoMa are all just a quick walk or drive away- ideal for enjoying a wonderfully urban lifestyle in one of world’s most desirable residential enclaves...

The scene of many Hollywood movie filmings as well as Armistead Maupin’s immortal “Tales of the City” the legendary long-running column turned into novels and a television mini-series, that captivated millions around the world over the decades as it portrayed an unforgettable era in the City’s history - this is truly Quintessential San Francisco!